This year’s Bob Davids Chapter minor league outing will be over the Labor Day weekend – and it will be a labor of love.

The date is Saturday, Sept. 1. And we’re getting the best of both worlds: A field box seat during the game so we can see the manually operated scoreboard in left field, and a two-hour all-you-can-eat picnic buffet beforehand featuring BBQ ribs and chicken, burgers (veggie burgers optional), hot dogs, mac ’n’ cheese, chips, ice cream sandwiches, and beverages from the Pepsi line of products.

This being a SABR event, we’ll have a pair of speakers. One is Courtney Knichel, general manager of the Blue Crabs and the only woman to hold a GM position in all of professional baseball. She’s also been with the team each of its 11 years of existence, so she’ll be able to tell you just about anything about the franchise, indie ball, and the stresses of being a GM without a guaranteed talent stream from a major-league organization.

Courtney has also promised us a player from the Blue Crabs (to be determined) to talk about his experiences in the pro game as part of an involved Q-and-A session. More details, of course, to come.

And all of this for just $35. Set your GPS for 11765 St. Linus Drive., home of Regency Furniture Stadium. Before then, set your checkbook for “SABR -– Bob Davids Chapter” to the tune of $35 per person. SABR members, nonmembers, potential members, family and guests welcome. Send your checks to chapter treasurer Dave Paulson, 5400 Vantage Point Rd., #801, Columbia, MD 21044. But act promptly. Even though it’s nearly two months away, you don’t want to forget – and all ticket requests should be received by Tuesday, August 21, so you can be seated with other chapter members.

Any questions? Get in touch with Bob Davids Chapter board member Mark Pattison at mpattison@catholicnews.com.

The Squibber is the Bob Davids chapter’s quarterly newsletter. It is emailed to chapter members roughly every three months. If you’re a Bob Davids chapter member and are not getting the Squibber, please check that your email address and chapter affiliations listed on the SABR site are correct. Please send submissions for future editions to Squibber editor Walt Cherniak at wcherniakjr@aol.com.

‘INSIDE BASEBALL’:  Library of Congress Steps Up to Bat, By Courtney A. Johnson

ALL-STAR WEEK IN D.C.:  Panel Examines Baseball’s Past and Future

HARPER’S SWAN SONG IN D.C.?: Walter Johnson Said He Would Retire in 1924, By Gary Sarnoff

SABR Day at the Nationals

What: The annual summer major league game meeting of the Bob Davids Chapter. The Nats take on Joey Votto and the Reds in Cincinnati’s only series in Washington in 2018.

Guests:  To Be Announced, but stay tuned for updates!

How much: Our SABR Day package costs $62 this year.  Our seats are in the 400s and the costs include the program, tickets to the game and the buffet lunch. The menu includes Burger bar (veggie burgers on request), hot dogs with condiments and sauerkraut, BBQ baked beans, field greens salad, grilled vegetable pasta salad, watermelon wedges, kettle-style potato chips, assorted soft drinks and water.

Who: SABR members and visitors … but only if you are among the first 40 attendees to register for this exciting event. The room we will be meeting in is limited to 40 dedicated fans.

Why: Because we love baseball!

HowComplete the registration form below and send it and a check for $62 per person before July 2nd to Dave Paulson, Chapter treasurer, and send send an e-mail to both Dave Paulson and Peter Cottrell, who will confirm your spot. Dave’s email is d2244p@yahoo.com.

Event is open to all SABR members and guests. We do ask that you list the names of any guests so we know who to expect. Please click “More” below for the registration form. END_OF_DOCUMENT_TOKEN_TO_BE_REPLACED

After the picnic dinner at the right-field picnic pavillion, the attendees were treated to a come-from-behind win by the Frederick Keys over the Nationals in a contest featuring several long home runs, with the Keys holding off a late comeback by the Nationals to win the game 7-6.

The Bob Davids Chapter Board would like to thank Bruce for affording us his time and efforts, and would also like to thank the Potomac Nationals team and staff for providing us with great speakers and the venue for a fine late afternoon and evening of baseball entertainment.

Members, look in your inboxes for links to our chapter newsletter, The Squibber. The latest issue includes the following articles:

Members, check your email for the September 2015 edition of the chapter’s quarterly newsletter.  Articles include: 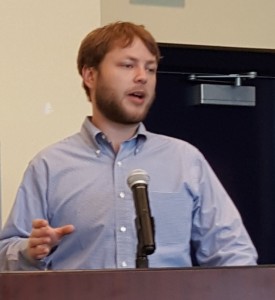 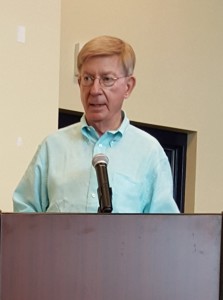 As George noted, Cubs history is littered with disappointment and strange historical threads.  Among other things, he referenced the “Bartman game,” and it’s clear that he’s seen too many Cubs disasters for too many seasons.  George recalled that the recently deceased Lennie Merullo (heretofore the last living Cub to have played in the World Series) had once committed four errors in one inning.  Lennie thereafter called his son, born that very day, “Boots.”  George also told of the Wrigley family’s concern about stories of a vendor in the bleachers who was infamous for short-changing fans.  The vendor, one Jack Rubenstein, subsequently left Chicago for Dallas, Texas.  There, under the name “Jack Ruby,” he ran a night club and became notorious for the murder of Lee Harvey Oswald.  One of the Cubs’ spring training forays to Catalina Island was the reason that Ronald Reagan, then a radio voice of the team, ventured to California where he took the screen test that changed history. END_OF_DOCUMENT_TOKEN_TO_BE_REPLACED

The April 2015 edition of the chapter newsletter, “The Squibber,” is now available. Members, check your email for a plain text copy of the newsletter and instructions on how to get a .pdf version.

– Details on “SABR Day at the Nats,” the biennial chapter gathering for a game at Nationals Park, on Saturday, June 6, 2015, with guest speaker George F. Will
– Back-to-back Rookies of the Year, by Jeff Stuart
– What It’s Like to Play Single-A Baseball, by Greg Larson
– Museum discounts of interest, by Patrick Dickerson
– Talkin’ Baseball upcoming schedule, by David Paulson
– D.C. Grays fundraiser, by Thom Loverro
– Other chapter news and notes

TRIVIA QUESTION:  In the 10 seasons the Nationals have played in Washington, who posted the highest single-season on-base percentage? END_OF_DOCUMENT_TOKEN_TO_BE_REPLACED

We didn’t have a hot stove around which to gather and discuss the latest signings, to rehash the 2014 playoffs, to voice our hopes for the 2015 versions of the Nationals and the Orioles, or to complain about the nasty cold in the Great Outdoors.  So the second floor ballroom at the Holiday Inn in Rosslyn served as a substitute.  More than 150 chapter members and guests gathered there on Saturday, January 31, 2015, for the 44th Annual Meeting of the Bob Davids Chapter, SABR’s first chapter.

Mark Pattison called the session to order at about 9:30 a.m.  The first matter on the docket was the business portion of the meeting (the elections of three officers).  Nominations had closed prior to the meeting.  Running unopposed were David Raglin (Vice-President—2-year term) and Barry Sparks (At-Large Board Member—2-Year Term), and the membership elected them on a voice vote.

The election for Treasurer (also a 2-year term) was contested.  The two candidates, challenger Gary Levy and incumbent David Paulson, each gave short presentations in support of their candidacy, followed by a secret ballot conducted using paper ballots.  Dave Paulson was reelected as The Treasurer.

On the program, Dave Smith batted leadoff with a presentation that dealt with answers to questions and issues that he and his colleagues at Retrosheet (http://www.retrosheet.org/) had developed themselves or fielded from media during the 2014 season.  Here are a few of the tidbits.  For instance, you know that Tony La Russa guided his teams to three World Series titles, six league championships and twelve division titles in 33 seasons (2,728-2,365, .536).  But did you know that La Russa’s managerial record by month was incredibly consistent, with winning percentages of .520 or better in each of the months of March through October?  We learned that only four pitchers (Derek Lowe, A.J. Burnett, Dan Haren, and Barry Zito) have wins against all 30 current teams.  Dave also discussed the phenomenon of the series held from May 2-4, 2014, in which all of the starters for the Tigers collected a hit in each game of the three-game series against the Royals in Kansas City.  Not only was that unusual on its face; checking back to 1950, there had been no other cases of this happening.  Finally, we’ve all heard that games are often decided if a team is leading after seven innings, but were you aware of how often that has proved to be the case?  Dave disclosed that in 2014, it was true 92% of the time.  It was no surprise that the Royals led the way with a record of 72-1 (98.6%).  But even the relatively hapless Astros “worst” record was 57-11 (83.8%).  The A’s were the best when trailing after seven innings (13-55, 19.1%), while the Dodgers were the worst (1-53, 1.8%). END_OF_DOCUMENT_TOKEN_TO_BE_REPLACED